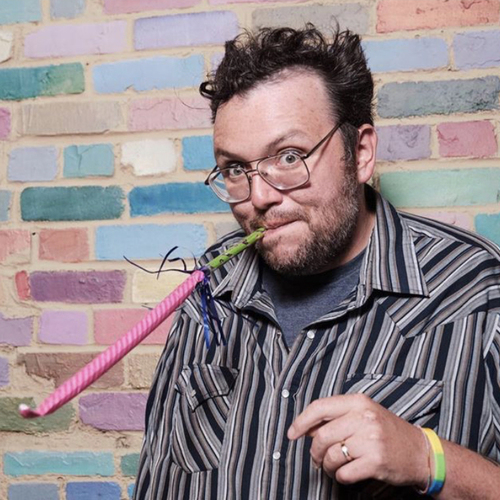 -2 tickets to the show

-signed poster from the artist

Sam Tallent is easily one of the funniest comics working today. There's no one quite like him--he's freewheeling, unpredictable, and above all hilarious. We've put on several hundred shows over the past five years and the times we've hosted Sam are certainly some of our absolute favorites.

We here at Clear Water Comedy are honored to present him live in Eau Claire at The Plus for a special tour taping.

Don't miss your chance to see one of the best comedians in the country, right here in the Chippewa Valley.

Known for whip-quick wit and rollicking improvisations, Sam Tallent is one of the sharpest, most original rising talents in comedy today. He has been called "the absurd voice of a surreal generation" by the Denver Post, and, when not maintaining a "Black Flag esque tour schedule" (Savage Henry Magazine), Sam has worked alongside many of the biggest names in comedy, including Dave Chappelle, Doug Stanhope, Dana Carvey, and Hannibal Buress. Sam has performed at the Oddball Comedy Festival, High Plains Comedy Festival, Hell Yes Fest, the Chicago Comedy Expo and the NY Film and Television Festival. Sam regularly headlines his hometown club, the legendary Denver Comedy Works. He won his battle on Comedy Central's Roast Battle, and was seen on VICELAND's Flophouse as well as the Chris Gethard Show. His writing has been published on VICE.com.

No video or audio recording or use of cell phones will be permitted during the show. No talking, yelling, or disruptive behavior will be tolerated of any kind. No warnings- your purchase of a ticket to this event means you want to watch and enjoy the show and follow these instructions. Failure to do so means you will be asked to leave without refund.

Sorry- no free passe or tickets will be allowed for this show.