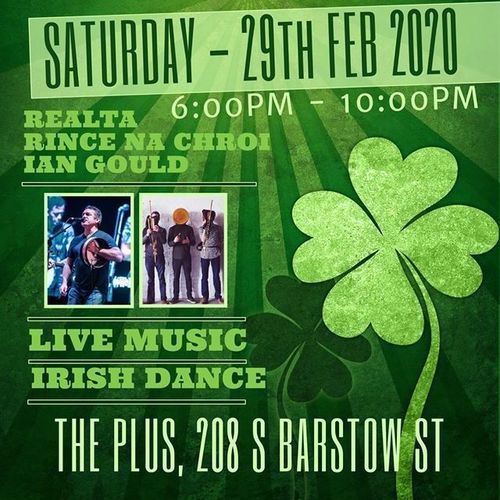 Grab a pint and a chair for a whirlwind tour of Celtic Fusion, award-winning Irish dance, and masterful Trad Irish Tunes!

***Online sales have closed. Tickets will be available at the door at 6pm***

Why wait for the shamrocks to bloom to show your Irish pride? O’Claire Craic is the city’s newest music festival designed to ease your winter blues with the warmth of Celtic sounds. Whether your blood runs green or you just like good beer, there’s no better time to become a Craic head!

Musician Ian Gould wryly warns his audiences, “If Irish eyes are smiling, you better watch your step!” A guitarist and singer from Belfast, Northern Ireland, Ian today shares Irish wit and his striking voice with American audiences. “Americans say I speak with a thick brogue,” Ian deadpans. “But I don’t hear a thick accent. In Ireland, brogues are just shoes.” Besides humor, Ian’s shows share pub spirit and conjure images of Ireland. Blending traditional Irish songs—everything from “Back Home in Derry” to “My Wild Irish Rose”—with contemporary music—from the Beatles to U2—Ian reminds audiences that “the only thing better than singing is more singing.”

Rince na Chroi (pronounced Rink-a na Cree), Gaelic for “dance of the heart,” was founded by Katie Stephens Spangler in February 2003 after 15 years of Irish dancing and teaching experience in Milwaukee, Chicago and St. Paul. Since opening its doors, Rince na Chroi has grown from 15 dancers to over 200 and has performed all over the Twin Cities and the Midwest at events such as the Irish Fair of Minnesota, the Flint Hills International Children’s Festival, Grand Old Day, Milwaukee Irish Fest, and many more. Rince na Chroi's dancers now perform an average of 100 times each year, in venues such as the Minnesota Zoo and the Landmark Center and with the Two Tap Trio, the Wild Colonial Bhoys, We Banjo 3 and Gaelic Storm.

Described by Irish Music Magazine as “a full bodied pipe and whistle extravaganza”, Réalta carry on the Bothy Band tradition of taking tunes by the scruff of the neck and firing excitement through them like hot flames! Hailing from the Ulster city of Belfast, this award winning multi-instrumentalist group present an enchanting programme of dance music interspersed with the occasional story, air and song. While Conor Lamb and Aaron O’Hagan pursue the melody on uilleann pipes and whistles, guitarist and vocalist Deirdre Galway explores the harmony and rhythms within the tunes. All-Ireland champions Dermot Mulholland and Dermot Moynagh complete the line-up with dynamic accompaniments on double bass, bouzouki, banjo, voice and bodhrán, making this one of the most exciting acts on the Irish music scene today.

The release of their second album, Clear Skies, has brought Réalta widespread critical acclaim, with the Irish Music Magazine summing things up by writing “Réalta have grown bigger, bolder and braver and this is one of the best CDs to have come out of Ireland this year!”.

The band have toured extensively bringing their unique take on Irish music to audiences accross Europe and as far afield as India and South Korea.

A performance by Réalta is joyous, energetic, foot-stomping, unforgettable, and unmissable!