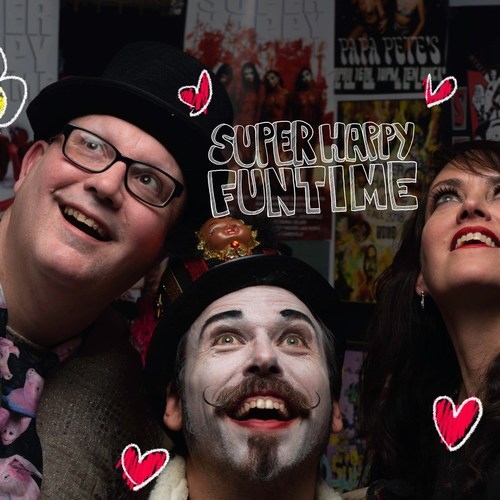 Is a 12 member live band, a burlesque troupe, and a circus act that is all together too contemporary, too modern, too bawdy, and too controversial to be defined just as “burlesque”. For 10 years it has been traveling the nation in its big red school bus, performing what can best be described as performance art and musical theater bridged with burlesque. Reminisce of the early stage productions of Rocky Horror and Hedwig and the Angry Inch; this rock and roll circus/burlesque/comedy/DIY punk theater monstrosity must be seen to be believed. And this is your last chance to see it.

tweakers, addicts, and people just trying to get out of the cold; SHFB grew into a monthly theatrical production and local hit. 5 years of avant garde burlesque and theater in a small midwestern and conservative community resulted in numerous police raids on

their shows, vandalized homes and theaters from unruly small town locals who thought burlesque was live sex with caged animals, and more. In 2010 they decided to take the show national. After a successful $20,000 kickstarter campaign they bought a school

bus, converted it into a circus-mobile, and began playing coast to coast. Their particular brand of irreverent, sexy, and catchy musical theater is designed to find your line and butt right up against it. From March through May of 2020 they will be bringing their epic production, “Betsy DeVos, the Musical” to venues all over the nation. Infamous in Grand Rapids, President Trump’s much maligned secretary of education has provided the perfect character to lead SHFB’s musical dedicated to love of money, grizzly bears raiding public schools, a divided nation during an election year, and heinous war crimes set to some of the catchiest music you’ll ever hear.

After 15 years of SHFB, and 10 of touring nationally, it is time to lay this beast to rest. In April of 2020 they take SHFB out one last time for their farewell tour, will you miss it or will you be one of the privileged to say that they were there?!