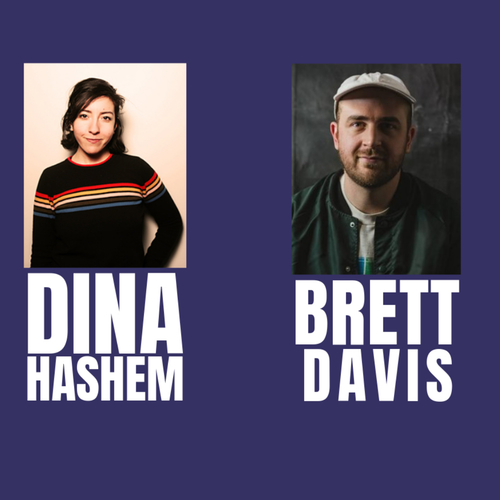 Dina Hashem first tried stand-up by auditioning for the 2010 New Jersey Comedy Festival. After winning 1st place, she continued to perform regularly in New York City. Dina’s style involves a subdued delivery with dark observations about her life and Arab upbringing. She has performed on Comedy Central’s Roast Battle, CONAN on TBS, Melbourne Comedy Festival, Comedy Central’s Clusterfest, SF Sketchfest, and can be seen regularly at The Stand and Comedy Cellar.

Brett Davis is an Andy Kaufman Award-winning comedian, often performing under the guises of his many twisted characters. He hosts The Podcast For Laundry on Forever Dog, a dark satire of niche podcasting. He previously hosted, wrote and produced over 170 episodes of the live public access variety show, The Special Without Brett Davis. He has been named a “Comic To Watch” by Comedy Central and he was profiled by the New York Times.

He is a writer and cast member for the National Lampoon Radio Hour, and a voice on Our Cartoon President. He has appeared on Late Show with Stephen Colbert, The Chris Gethard Show, Jon Glaser Loves Gear, and Animals, as well as the film Clara's Ghost. He also wrote and starred in several web series for Comedy Central and IFC, including Boy Band, Mad Memes and Autumn With Dracula.