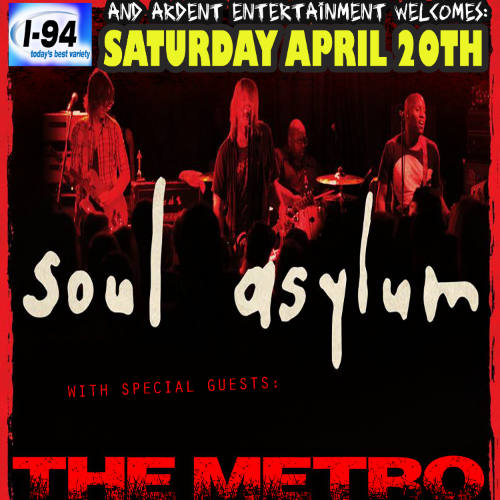 i-94 and Ardent Entertainment bring Soul Asylum to The Metro

****ONLINE SALES HAVE ENDED. TICKETS AVAILABLE IN PERSON BEFORE DOORS OPEN AT OUR SISTER VENUE THE PLUS (208 S BARSTOW ST IN DOWNTOWN EAU CLAIRE, OR AT THE DOOR BEGINNING AT 6PM*******

Soul Asylum has been inspiring an incredible level of passion for their music since 1981, when the band, initially known as Loud Fast Rules, formed in Minneapolis. The band's raucous live sets and early releases on the hometown indie label Twin/Tone —including the albums Say What You Will, Made to Be Brokenand While You Were Out —earned it a loyal fan base and widespread critical acclaim.Soul Asylum's indie success led to the band entering the major-label mainstream with 1988's Hang Timeand its 1990 follow-up And the Horse They Rode In On, and achieving a platinum-level commercial breakthrough with 1992's Grave Dancers Union (3x platinum)and 1995's Let Your Dim Light Shine. Grave Dancers Union featured the international hits "Runaway Train," which won a 1994 Grammy as Best Rock Song, and "Black Gold," while Let Your Dim Light Shine (platinum) spawned the hit "Misery." The band went on hiatus after 1998's Candy from a Stranger, during which time Pirner released his first solo effort, Faces & Names. Soul Asylum returned to action in 2006 with The Silver Lining, Delayed Reactionsix years later and in 2018 Sony Legacy released a previously unheard live album, “ Live from Liberty Lunch, Austin, TX” recorded in 1992.