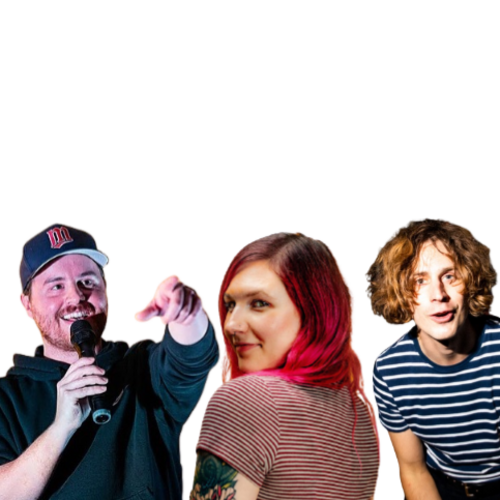 THREE OF OUR FAVORITE COMEDIANS IN THE MIDWEST ARE GOING ON TOUR! DON'T MISS YOUR CHANCE TO SEE THIS SHOW, RIGHT HERE IN THE CHIPPEWA VALLEY!

Courtney Baka is a comedian, writer and recovering mall goth. With her dry wit and unique perspective she finds the comedy in a tragic world. She was recently named 2019 Minnesota Comic to Watch, and performed in festivals such as 208 Comedy Fest, The Limestone Comedy Festival and 10,000 Laughs. She is also a writer for the punk rock satire site The Hard Times. She can typically be found in her Minneapolis apartment with her two cats where she is currently living out her dream of becoming a cliche.

Joey Hamburger is a filmmaker, playwright, and comedian from Minneapolis. His short films have been featured on Funny or Die, Film Shortage, and a number of film festivals, including the Austin Comedy Film Festival. His theater company, Sheep Theater, was named Best Theater Troupe in the Twin Cities by City Pages Magazine in 2018. His stand up comedy is dynamic, unique, and not to be missed!

Grant Winkels has been a performer for his whole life. After years of gigging as a musician, he finally convinced himself that he was funny. He’s been convincing audiences ever since. Grant pretends to be light-hearted, but his exasperation always creeps in. He hosts the weekly open mic at Sisyphus Brewing and Stand Up Sundays at Fair State Brewing in Minneapolis. Grant is also a producer on the annual 10,000 Laughs Comedy Festival in Minneapolis.

Grant cohosts the podcast, We Cool?, in which listener submit anonymous apologies for things they can’t admit to in their lives. He tours the Midwest and country and has opened for comedians such as Mike Recine, Matt Braunger, Brad Williams, Kate Quigley, Steve Rannazzisi and Mary Mack. Grant can be seen performing in the Twin Cities at the Comedy Corner Underground, Sisyphus Brewing, Rick Bronson's House of Comedy and Laugh Camp Comedy Club.