Ezra Bell Live at The Plus

Ezra Bell Live at The Plus 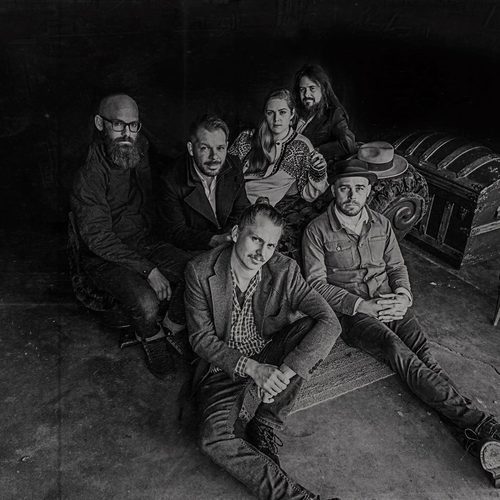 (****ONLINE SALES ARE CLOSED. TICKETS WILL STILL BE AVAILABLE AT THE DOOR AT 7PM)

﻿EZRA BELL LIVE AT THE PLUS

Ezra Bell’s first full-length debut features ebullient soul twang, flowing and leaping like the music of a late 60s/early 70s recording of well-trained freaks dabbling in various genres. This Portland band sounds like they effortlessly recorded one of those forgotten-gem “cult albums”, despite it being early 2019,

After three well-received EPs and playing regularly in Portland since 2013, the playfully literate and cheerfully plaintive Benjamin Wuamett and his gaggle of quite fit players, conjure up a festive dusky folk-rock-blues-jazz-R&B-pop vibe that doesn’t smother out the melancholy. These haunted stories include key tracks “Tourists” (“This one is about realizing the game is rigged, but you still have to play; it’s the only game in town”); “Yawning at the Seance (“This one is about the stories we tell ourselves in order to feel like everything is okay”), and “Let Me Do the Talking.” About that last one: “The opening line is a rip-off of something the boxer Jack Johnson said when asked how he managed to so intrigue women. He said ‘eat jellied eels and think distant thoughts.’ I think it’s one of the great travesties (and a telling indictment of our society) of our time that a great man’s name has been usurped by some surfer singing about breakfast.” The glistening, giddy music on these tracks help to document the car-wreck gas-lit lifestyles Wuamett masterfully describes. He displays gleaming shards of a self-depreciative self-awareness but also someone busy getting lost. “The overall theme going into this?” Wuamett answers to what the album is about. “Desperation. A call to arms. A whimper. A declaration that being witty by yourself at 4 AM in a basement, is a poor way to live.” Ezra Bell features Maurice Spencer (bass), Tom Trotter (drums), Aaron Mattison (horns and arrangements), Honora Hildreth (backing vocals and percussion), and Jeremy Asay (keys and guitar) more-than-ably backing up Wuamett’s story-songs and satirical jigs with organic precision.

Wuamett came up with the band name when he was in Portugal and a girl he was with dared him to try a nearby concession stand’s popcorn snails. He had two full bowls. “They were delicious,” he says. “When I got back to Portland, I couldn’t sleep. On the way to work the next day, after a rainfall, I saw a slug crossing the sidewalk. I bent down and ate it raw on the spot. I didn’t go to work that day I went home, grabbed a garbage bag and spent the morning gathering snails, slugs, worms (not sure if worms fall in the mollusk family but, still, delicious) which I brought home with me. Hours later, as I sat shirtless on my couch, covered in sweat, I knew I had a problem. It would be too long a story to talk about all the places my disease took me. Suffice to say — I once hitchhiked to California because I really wanted to taste a banana slug. In the end, it became too much and I sought help via the internet. I began posting on various forums about my problem. I hadn’t been to work in weeks. Unfortunately, there are very few mollusk addicts on the web and my various inquiries went without commiseration until a nice man from Georgia spoke up and we began a long correspondence during which he shared with me the tools that had enabled him to survive in this strange world. He saved my life. His name was Ezra Bell.”

Raw and honest folk from Eau Claire's own.

maren day and morgan kavanagh are bad posture club. they grew up in washington state and currently make music in the twin cities.

Since the release of their second album, «Vinyl and a Heartache», they have played concerts all over the world, been listed on the biggest radio channels in Norway and appeared on the Top 100 Country charts in the US, streamed more than three million times on Spotify, booked to the biggest festivals in Norway and Americanafest in Nashville and won a Norwegian Grammy.